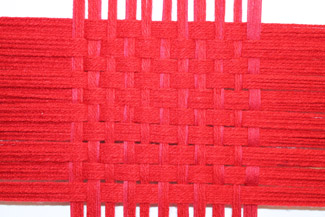 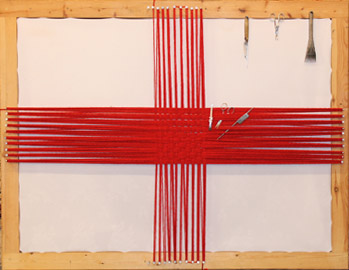 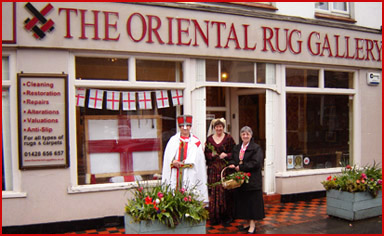 The St George's Day Celebrations are annually held in Haslemere on 23rd April and traditionally include a themed Window Display Competition, jointly hosted by The Royal Society of St George and the Haslemere & District Chamber of Trade and Commerce. The event is a much anticipated visual highlight in the Town’s Events Calendar and enjoyed by all the community.


As winners of this prestigious event in 2011, Anas and Sandre wanted to create a unique piece for 2012, to highlight St George’s day at The Oriental Rug Gallery Ltd, using their rug craftsmanship skills in a visual and dynamic way.


They decided to re-use the bespoke, sturdy wooden ‘peg’ rug loom that was specially constructed to Anas’ exact weaving specifications, for the Rug Weaving of the Haslemere’s Coat of Arms. As a rectangular frame, it is an ideal foundation onto which to create a St George Flag design cross-hatch weave design.

As well as being England’s national emblem, the St George Cross: a red cross on a white background also forms part of the ‘counter-change of saltires’on the Union (Jack) Flag of Great Britain. See our: HM the Queen's Diamond Jubilee Embroidery Gift creation, for information.


Sandre began be attaching a linen backing to the wooden frame that would form the 'white background' of their St George Flag design. Next, Anas began the process of ‘setting up’ the weaving of the ‘red cross’ part of the design. First, he calculated the total number of warp threads needed to form the horizontal and vertical ‘cross’ parts of their design. He then measured out a 1.5-cm spacing for the pegs, and attached these to both sides and top and bottom of the wooden frame.

Next, Anas attached a double row of hand-spun red wool threaded horizontally across the frame, onto the pegs on either side. He was then ready to meticulously hand-weave double strands of red wool vertically – inter-weaving them through the attached horizontal wool threads – to create an interlocking, ‘cross-hatch’ weave to form the cross design.

Once woven, the vertical threads were then attached to the pegs at the top and bottom of the frame. Anas' Master Rug Craftsman Tools – all originally hand-crafted and bespoke-made to fit his palm width and fingers length, and used to create the weave – were also hung on the wooden frame at the top and placed in the actual weave, to form part of the design display.

On 23rd April 2012, The Oriental Rug Gallery Ltd received an honorary visit from the Chairman of The Royal Society of St George Haslemere branch Shirley Hankers, with St George and the Hand-Maiden who gave out red roses, represented by Cllr. Melanie Odell, as part of the St George Celebrations taking place in Haslemere that day.